With Brigade Games new release of German equipped WWII Chinese Infantry its time to checkout uniforms. These pictures are posted for White Knight on the LAF. 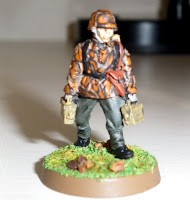 I finished my SS Test figure in the Autumn camo smock. It's a dark gloomy rainy day in Perth so I had to max up the flash to highlight the cam. I am very happy with the colours. Next figure I will attempt to change the pattern to a more leafy appearance. 28mm figure from Bolt Action Miniatures SS range.

I have joined the technically advanced and added a Neocounter to the blog. It was a mind boggling experience but I managed. I want to see if I get any visitors from Kazakhstan.
Posted by Beccas at 8:23 PM No comments:

I had my first experience with Basic Impetus on Friday night. My mates Guido and Claude dug out their 15mm DBA/DBM figures from deep storage for a test game. Alexander v Persians. The game started off well with movement simple to understand. Things became hazy in combat but we eventually worked out melees. What stuffed us was opposing base contact. Guido and Claude were stuck in the DBM mindset in that bases need to be perfectly aligned for combat. And I had no idea. Turns out bases just need to touch at any angle for a melee to occur. I don't think Guido will be that keen to try them out again, while I reckon Claude would give them a go. I would like to have another try. Thanks to the assistance from guys on TMP and the Impetus forums for your advice. I can see that this would be a quick and enjoyable game to play once the rules are fully understood.
Posted by Beccas at 6:36 PM No comments: 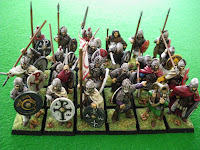 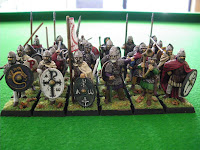 It took a while but I finally finished this 24 man unit of Roman0-British for WAB. Figures are 28mm Gripping Beast based up for WAB Age of Arthur. On to the next unit of 24.....
Posted by Beccas at 12:17 PM 1 comment: 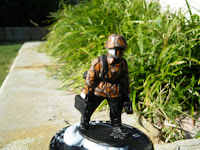 I am mucking around with SS camo at the moment. I have this test figure going through the paces. Does the cam look OK? What else can I do to improve? Advice appreciated.
Thanks 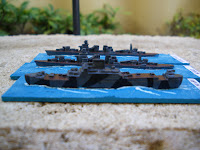