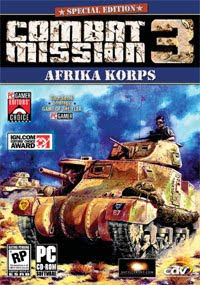 Not much painting going on but lots of PC Wargaming. Combat Mission Afrika Korps is a brilliant game for wargamers. This version covers Crete, North Africa and Italy. Each 3D unit on the battlefield represents a rifle section, heavy weapon team, gun or a vehicle/tank. I have been playing the Crete campaign as the Australians. Sound effects are great. My Aussie teams run around the battlefield yelling stuff out in an Australian accent. At the end of each battle you get the battle stats of KIA, MIA, Wounded etc. I love that detail. A special bonus is the 3D maps which have given me some great ideas for 28mm skirmishing.

To The Last Round 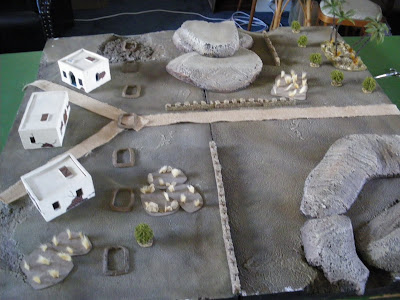 The Battlefield.
Australian Infantry defending on the left. German Afrika Korps attacking from the right.
Three victory locations are located on the hill at the top of the picture, the centre house and the southern house. 2 to 1 attacker/defender ratio. 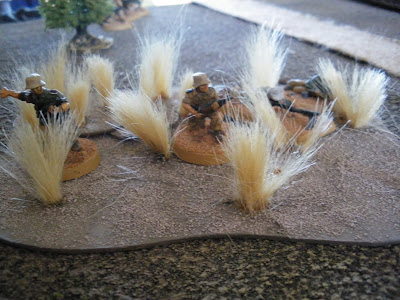 Germans in the scrub. 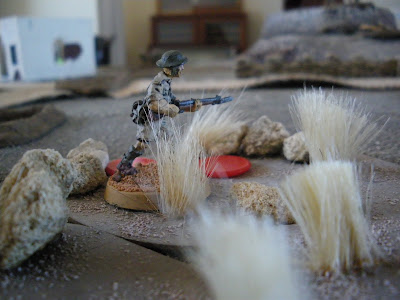 Played a game of Disposable Heroes against Guido today. I used the "To the Last Round" scenario found on the Iron Ivan yahoo group. To the Last Round is based on the true life Battle of Hosingen during the opening of the Battle of the Bulge in 1944. The Americans being ordered to delay the Germans, fight to the last round of ammo and bug out.
I adapted the scenario to the desert. The Australians fighting a delaying action against Rommel on the road to Tobruk. To win the Germans need to take two of the three victory locations or wipe out the defenders. The Australians need to hold two victory locations for six turns or wipe out the attackers. I am playing the defender.
A brief overview of the battle :
Turn 1 - Australians deploy, spread out and thin on the ground to cover all possible attacks. The Vickers MMG is in the centre house. A bren gun team is placed on the hill with the victory point location. Germans deploy out of the palm tree grove concentrating on one side of the board only and attack the hill victory point location. Germans take the hill in turn one killing 4 Australians to 1 German.
Turn 2 - Not much goes on other than a shootout. Australians loose 1 man, the Germans loose 2.
Turn 3 - Germans begin coming down off the hill concentrating on the northern house. Both sides loose their HMG's this turn. Australians 2 dead, Germans 3.
Turn 4 - Germans prep fire on their intended targets causing 4 Australian causalities to their 1. The Australian platoon commander is killed which is a major moral causing problem.
Turn 5 - Germans bayonet charge into contact with the defenders. No quarter is shown by either side. The Australians are wiped out. One man is left alone in the scrub pinned down. Germans fire at him causing him to rout off the battlefield.
Total German victory at the end of turn 5. This is the exact result of the real battle at Hosingen in 1944. I loose, Guido wins.
I have not played Disposable Heroes for about 6 months. It was good to get a game in. I really like these rules. 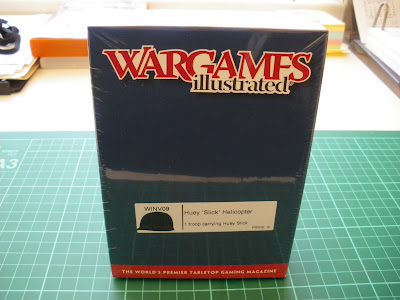 Hi all. I thought I would post some images of unboxing the best miniatures release of 2009, the Wargames Illustrated/Battlefront 15mm Huey Slick. The first thing you will notice is the excellent packaging. The product presentation is top notch. The box is 100mm x 150mm. It look like a nice box of chocolates. The back of the box says "Designed in New Zealand, Made in Malaysia." 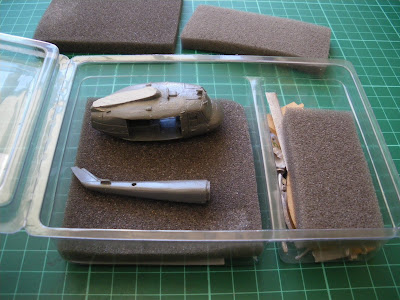 Opening the box you find the usual Battlefront plastic blister set-up. Everything is nicely packed and protected. 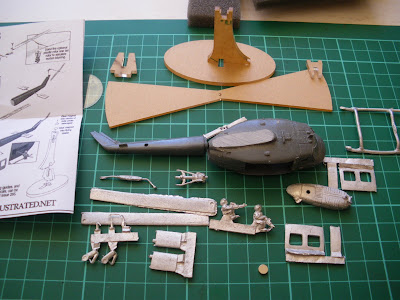 Tipping out the contents (and checking all the bits are in there - you all know what I mean) you will find all the above items including two 15mm door gunners, a choice of plastic in flight rotors or metal rotors, a plastic flight stand and a couple of magnets to attach the chopper to the flight stand. The instructions look clear and concise. No decals in the pack. You will note the plastic bits look like they are made of wood. But their not. It's a protective covering over the plastic. 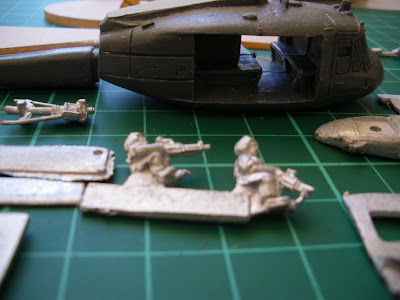 And finally a close up of the door gunners.
Overall a great model. It's really well made. The hull is resin and the little fiddly parts are metal. Detail is superb. 2 thumbs up Battlefront and Wargames Illustrated.
A special message to Dom at Dom Decals. I need 15mm Royal Australian Airforce decals. PLEAAAAAAASE!