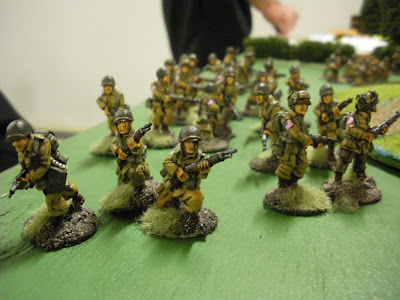 I travelled into the club last night and met up with Youngy for a Disposable Heroes showdown.  My Waffen SS v Youngy's US Airborne.  Elite v Elite.  No-ones running from the fight in this battle.  We used the page 44 Meeting Engagement scenario.  The building objective is in the centre of the table. 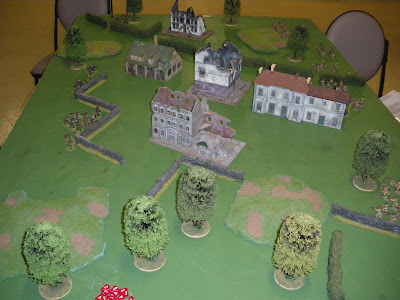 My SS are on the left.  The US Para's are on the right.  I am fielding a Command Team, 2 Full Sections, 1 Sniper Team, 1 HMG, and 1 Mortar.  The Para's have a Command Team, 3 Full Sections, 1 Browning MMG, and 1 Mortar Team crewed by about six men.  I am thinking to myself.  Whoever wins initiative is going to run into that objective building in turn 1.  We throw the dice, I loose.  Youngy's into the hard cover objective and I am going to be pressed getting him out.  From there we move all our units at a run and get into cover and good firing positions. 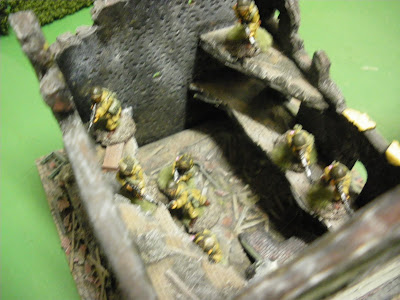 Once the shooting starts it's first blood to the Para's.  Youngy is very worried about the SS HMG that has set up on the second floor in the next building. 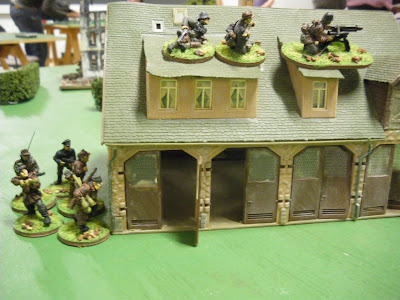 From that point on it's a gun battle.  Troops are getting picked off let right and centre.  Because both sides are elite, pins are very hard to achieve. 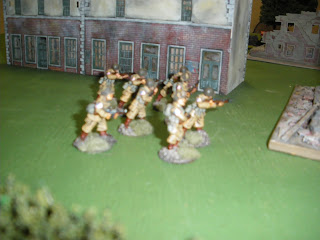 Youngy must have got bored because out of the blue his section holding the objective charge out and into the opposite building that houses by HMG team and Command Team.  Prep-Firing takes it toll on the Germans, but no pins are achieved.  That allows snap firing back and a few para's fall in no-mans land but they get in the building and close combat to the death occurs.  The SS HMG crew give the Command a hand.  The SS are triumphant.  But only two of them remain.  7 Paras and 5 SS are KIA in the melee.

Over the next few turns the SS HMG rules the battlefield in the centre.  The para's are mowed down whenever they broke cover.  The Paras retired from the field of battle to fight another day.  The SS are victorious.  The butchers bill.  26 Paras Killed.  10 SS Killed.  Game length 120mins.  Great fun and many thanks to Youngy for the game.  Thanks to NWS blokes as well.  The club hall was full of gamers and travelling well.

Hi guys.  Just letting you know I am having a lot of problems with blogspot.  From my home computer I cannot see my followers or recent posts from the blogs I follow.  If you notice I have been a bit quite it's because I don't know when you post new stuff.  From work I can see but I dare not comment from there.  So basically, apologies for not being as social as I would like to be.  Hopefully the blogger people sort out the problem because keeping up with you guys is now a big part of my hobby.
Cheers
Paul
Posted by Beccas at 8:11 PM 13 comments:

Big breaking news.  The Americans have killed Bin Laden in Pakistan.  US Special Forces took him out and claimed his corpse.  DNA has confirmed the dog is dead.

This is a great day.  Hats off the Americans.  The debt is now paid.  Well done.

New York is celebrating.
(Sorry for the rant but this needs to be said)
Posted by Beccas at 11:34 AM 7 comments: