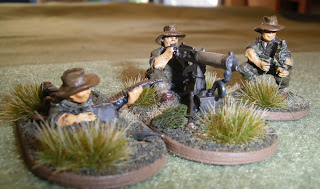 Painted up this Australian pacific Vickers MMG team.  Figures are 28mm from Brigade Games Diggers in the Pacific range.
Posted by Beccas at 7:41 AM 13 comments: 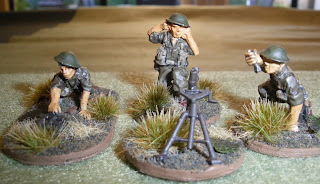 Australian 3" Mortar Crew for the pacific.  Figures are 28mm Brigade Games - Diggers in the Pacific.
Posted by Beccas at 10:35 AM 10 comments:

I can't see my followers anymore.  Is anyone else having this problem?
Posted by Beccas at 8:52 AM 3 comments: 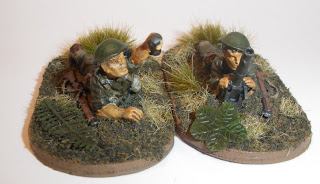 I have not been slacking off, honest.  I just finished three support teams for my planned WWII Australian Pacific platoon﻿.  Usually I paint the support options last.  This time I painted them first.  Over the next couple of days I will put up pics of a 3" Mortar Team and a Vickers MMG Team.  Figures are 28mm and they are from Brigade Games Diggers in the Pacific range. 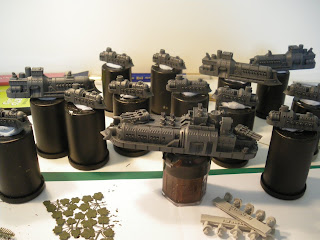 And a sneak preview of whats next on the painting table.  First coat is on.  Time to bring out the details.  I plan to make this fleet very WWII like.  Thanks for looking.
Posted by Beccas at 4:51 PM 9 comments:

Some highlights from the Kokoda movie.
Posted by Beccas at 1:10 PM 9 comments: 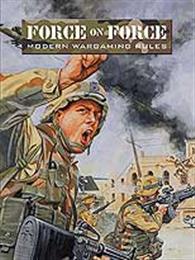 Ambush Alley Games have graduated to the big time signing a deal with Osprey Publishing to release their popular modern rules in full colour hardback.  These rules cover modern skirmish wargaming in current hot spots.  It appears you need around 10 figures for the regular armies and around 25 figures for iregular armies.  Originally designed for 15mm, the ideal table size is 2ft x 2ft.  Think DBA size.  However, you can play in what ever scale you want.  The rule book covers army lists for the Australians, Germans, USA, and British regular and elite units.  A deal has been signed to release around 20 scenario books including a Vietnam and a future war version (think Battle Los Angles).

Neil from the Meeples and Miniatures Podcast has done a review of the rules and interviews with the authors and Osprey.  Well worth a listen.  (Episode 73)
http://www.meeplesandminiatures.co.uk/

I got brainwashed into buying a copy.  Don't tell the wife!
Posted by Beccas at 4:15 PM 10 comments: