I am a super nerd -the shame

My first attempt at film making.
Apologies too.  I had to turn the word verification on in the comments section because the blog has been getting absolutely hammered with spam.  Word verification is a pain in the butt.
Posted by Beccas at 5:50 PM 7 comments: 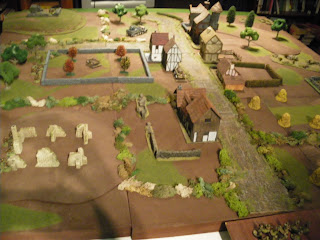 Hi all.  Another snap shot of a Bolt Action game played this week.  I travelled to Guido HQ with my Waffen SS and I had a crack a Guidos British infantry in a small village setting near Caen in 1944.  We played scenario 1 - Envelopment.  I was the defender.  Defending my base line from the attacking British.  Left side of the table above.  I get 2 points for every British unit destroyed.  The attacker gets 2 points for every German unit destroyed.  2 points for being in my defensive area.  And 3 points for exiting a unit off my base line. 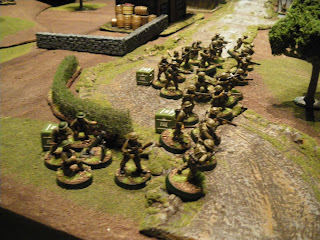 The British start off with a Preparatory Bombardment.  Every unit I have on board is targeted.  The British have a special rule where they get to throw 2 D6 in Prep bombardments and pick them highest result, effectively giving them a double chance at hitting my units.  The attacks left my SS in disarray.  Men blown to bits and everyone pinned down.  My units were spread out evenly across the base line not knowing where the British would come from.  And from the left flank they all came, in a hoard. 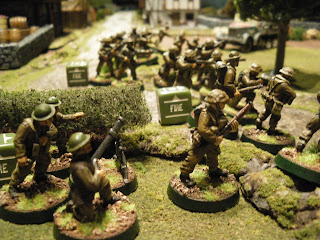 The British set up their medium mortar.  I rate this weapon as one of the best in the game.  The British drop smoke and conceal their advance from MG42s. 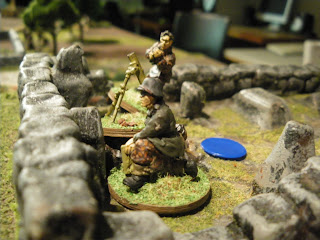 The SS mortar crew lost one of their crew in the prep bombardment and took a pin, but they fight back and target the British mortar to no effect. 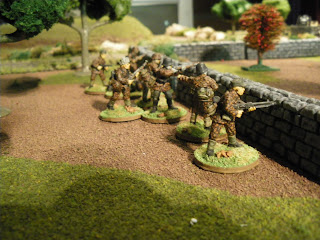 A squad of SS are hidden behind a wall.  But no British can be seen because they are going all out on the other side of the board.  Time to redeploy.  Will there be time to get there? 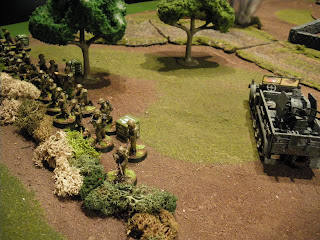 The British reach the safety of soft cover but are still concealed from a huge smoke cloud out of shot. 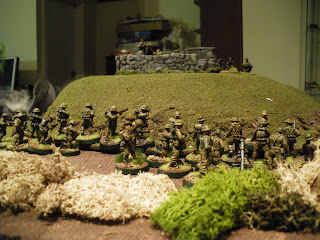 The British dash for the dead ground at the base of the hill directly underneath a MG42.  Bolt Action being true line of sight means the SS cannot see them and the British are now in assault range. 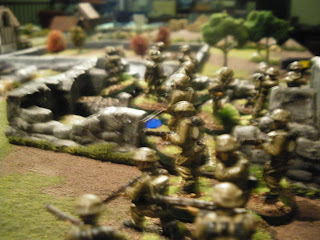 Very blurry picture of the British taking the hill, wiping out a mortar team, HQ team and causing the MG42 to flee for their lives.  Nothing can now stop the British leaving the battlefield and claiming big game points.  The game ended.  British 16.  SS 0.  Big win to the British and I have hell respect for bombardments and British Forward Artillery Observers.  Deadly.  Great game.  Thanks to Guido for whipping my butt and his son Jake for being the rules expert and dice drawer.  Bolt Action is a good game.
Posted by Beccas at 9:09 PM 7 comments: