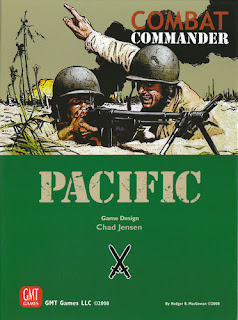 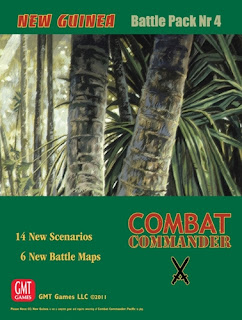 Apologies for the lack of posts this month.  I have been ultra slack at painting (done none).  Playing too much Call of Duty live on the Xbox.  But I have also been playing a lot of tabletop games, averaging one a week.  That's been a mixture of Dystopian Wars, Blitzkrieg Commander and Victory at Sea.

My latest shinny thing is Combat Commander Pacific and the New Guinea expansion pack from GMT Games.  .Combat Commander Pacific is ranked number 3 on Boardgame Geeks best wargames of all time list.  It's a Squad Leader style game with squad counters and squad weapons such as LMG's, HMG's and mortars.  You control platoons of units fighting historical scenarios.  All your moves are card driven which is a great game mechanic because you can't really pre-plan anything.  You need to think on the spot with this game.  Combat Commander Pacific has Australian units and battles so that's why I got it.  And I can convert a lot of the scenarios to miniature wargaming.  Anyway, my friend Jason is going to walk me through a game shortly.  He is a veteran gamer of Combat Commander Europe.  I will let you know how I go.

And I will paint something soon - I promise.  And if anyone want's to link up on Xbox live.  Let me know.
Posted by Beccas at 10:04 AM 11 comments: