I'm Back.  Downloaded Google Chrome and now the blog is back to normal.  I will be able to catch up with everyone's blogs again.  Thanks to Monty who alerted me to the solution.
Posted by Beccas at 8:20 AM 9 comments: 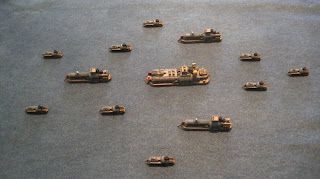 I have just finished the ships from the Empire of the Blazing Sun Dystopian Wars starter box.  Introducing the Imperial South Seas Detachment or SSD.  The Empress Shizuna has dispatched the SSD to the Southern Ocean to discourage the ever growing terrorist state of the Covenant of Antarctica.  The so called Lord Sturgeon is of Britannian origin and we can never trust those pale skin fish and chip eaters.  The SSD is lead by a mighty Sokotsu Class Battleship, and supported by three Nakatsu Class Cruisers and nine Uwatsu Class Frigates.  They will be soon joined by an Imperial Carrier.  The SSD is the finest fleet in the Empire of the Blazing Sun.  May they bring honour to our Empire . 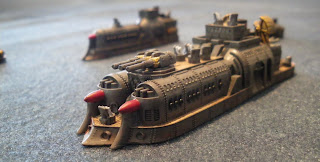 ﻿Sokotsu Class Battleship Top View
These ships were a lot of fun to paint.  Without doubt the best detailed miniatures I have ever owned.  A lot of Dystopian Wars gamers are painting their fleets in bright colours but I decided to go for the traditional naval look.  The base grey colour is WWII Japanese Navy Sasebo.  The decks are traditional ship deck tan.  I painted the Dystopian tech items in bronze.  Missiles in white.  I have ordered the carrier and that will be the next addition to the fleet.   ﻿
Posted by Beccas at 11:04 AM 13 comments: