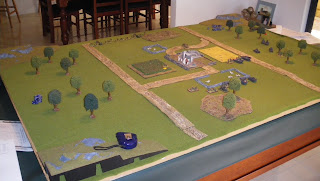 The brave Belgians and the Germans face off in a 1000 point meeting engagement of Blitzkrieg Commander.  Both sides advance towards a farmhouse destroyed by the relentless Luftwaffe.  Yours truly commands the Belgians, Guido commands the Hun. 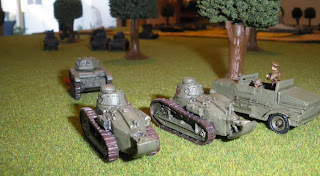 The Belgians win initiative and move first, attempting an outflanking maneuver on the left.  The Belgians have one awesome ACG-1, and two not so awesome FT-17's. 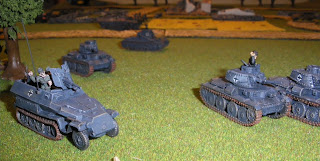 Unfortunately, the Belgian flanking tanks are up against a nasty German tank formation.  Outranged and outgunned the Belgians are destroyed in a matter of minutes.  Flanking maneuver failed. 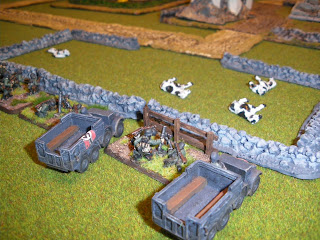 The Germans decided they don't like cows and shoot them all.  Here two German mortar teams set up behind a stone wall.  Ready to rain suppression down on any Belgian infantry that advance towards the farm. 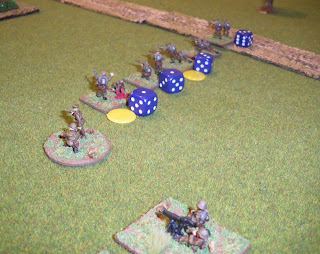 And here come the Belgians advancing along the right road.  Infantry with a couple of HMGs in support.  They come under heavy mortar fire.  Yellow markers are suppression.  Blue dice are the hits taken.  Each unit needs 6 hits to be knocked out of the game. 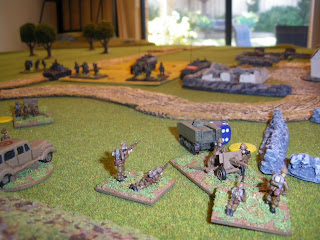 More Belgian infantry advancing in the centre.  This time they have 47mm SA-FRC anti-tank guns in support.  However highly mobile German infantry are now in the farmhouse and are raining down fire on the attackers.  Both AT Guns are suppressed and are soon knocked out without firing a shot. 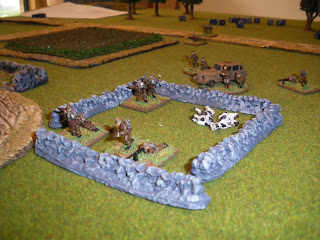 The Belgians Alamo.  They make it towards the protective cover of a stone wall and find more German cow atrocities.  The Belgians have two anti-tank rifles which will surely put a halt to the advancing Panzers. 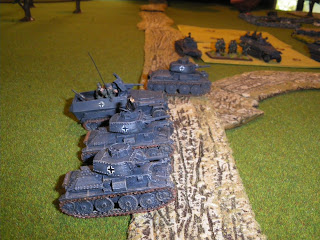 The Panzers line up on the Belgians left flank and let rip.  The Belgians are under intense fire from armour, mortars, infantry and HMG's.  Before long the Belgians reach breakpoint, fail their break dice roll and run off the battlefield.  Germany victorious.  The Belgians lost three tank units, two AT units, two AT Rifle units, and three infantry units before breaking and fleeing.  The Germans lost one HMG unit and two Infantry units.  Thanks for the game Guido.
Posted by Beccas at 8:06 AM 17 comments: 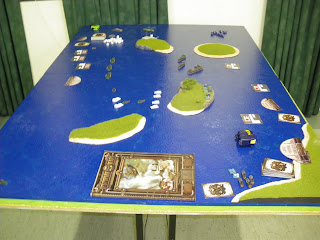 The ocean battleground.
The heroic Empire of the Blazing Sun on the right.  The evil Federated States of America on the left.  This was a 400pt recon game. 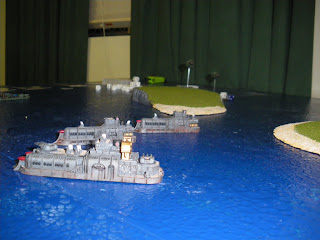 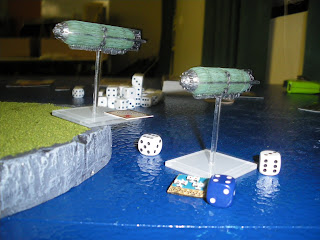 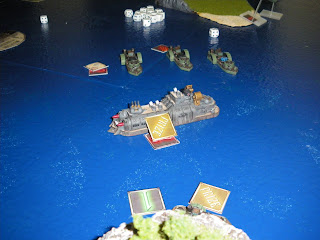 The final shame.  My Empire battleship was boarded by Marines from three Federation cruisers and taken as a prize.  ﻿
Last night I travelled to the Outpost North gaming club to participate in my first ever game of Dystopian Wars.  It was a simple 400 point recon game.  My opponent was Jason, a fine outstanding gentleman with excellent modeling and game tutorial skills.  The game lasted three turns.  To put it simply, I got SMASHED.  My whole fleet was sunk, except the battleship which was taken as a prize.  My Tiny Flyers were all shot down.  I did get a couple of campaign points for having a fully painted fleet.  YAY.  The Federals lost three frigates sunk, and one taken as a prize. (That only happened because Jason was gracious enough to tell me how to carry out that maneuver).
My thoughts on Dystopian Wars.  This is not an easy game to play.  You need to be aware of your ships capabilities.  When to link attack and defensive weapons, when not to link them.  Be aware of ranges.  Watch out for blimps.  They are nasty.  Tiny Flyers suck.  They are really complex to use, get shot down easily, and they don't do much damage.  Jason explained that they are better to use as a swarm.  Frigates are nasty little ships.  Fast, and they throw out a heap of firepower.  I really underrated the frigate but I now have a greater appreciation for them.  Boarding ships is nasty.  The number of marines in each ship is very important.  Stay away from ships with a lot of marines.  The battlefield gets ugly with a lot of counters next to damaged ships.  I really don't like that but its part of the game.  In summary, I really enjoyed myself.  I have to study the rulebook more.  Again, many thanks to Jason for his time.  I learnt a lot.  But will I remember it!
Posted by Beccas at 9:21 AM 12 comments: 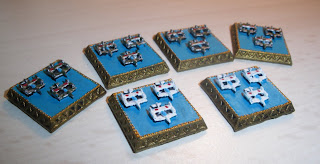 I have not been very painting pro-active lately and in a mad rush today I had to paint up six bases of tiny flyers for my Dystopian Wars campaign game tonight.  White are my fighters, and the silvers are my torpedo bombers.  These things are tiny.  The bases are 20mm x 20mm and each plane is 6mm in length.
Posted by Beccas at 1:43 PM 11 comments:

Bombers over the Phillippines

I just signed up to a Dystopian Wars escalation campaign with a bunch of local D-Wars players.  Bombers over the Philippines written by Mr D6G Craig Gallant will have us all waring over the above map with sea, air and land forces.  It's a casual paced campaign which really suits me.

First mission is recon.  400 pts.  I am thinking about throwing in a Battleship, two Cruisers, and eight frigates with 6 squadrons of tiny flyer's as air support.  Any suggestions welcome.
Posted by Beccas at 4:55 PM 9 comments:

Warlord Games have announced the impending arrival of the first Black Powder supplement titled The Last Argument of Kings : Warfare in the 18th Century.  Wars covered will include