Australians in the Pacific Command 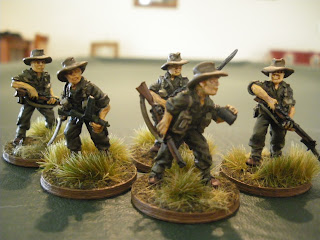 The platoon command team.  Officer with a .303 rifle, Sergeant with the Owen SMG, and three riflemen. 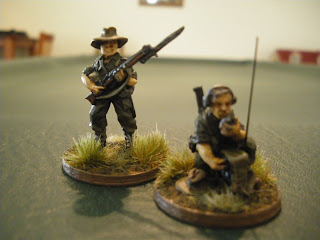 Here's a few figures I have been working on.  Not very happy with the command teams faces.  But very happy with the uniforms.  All I have left now for Aussies in the Pacific is one more 10 man section, a flame thrower team, an engineer team, a mountain gun, a 2pdr AT and two Australian variant Stuarts.  Figures above are 28mm Brigade Games.
Posted by Beccas at 2:39 PM 11 comments: 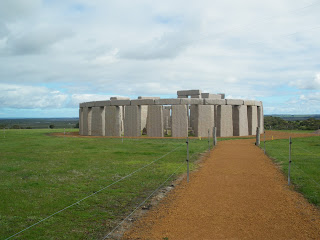 I just got home from holidays in Esperance, Western Australia.  A 9 hour drive from Perth City.  A crazy farmer in Esperance built this 100% true scale replica of Stonehenge.  All the stones were quarried and cut to shape, transported to the site and moved into place by big heavy cranes.  You can walk in there and have a look around for the price of your sole, or about $50.00 a family.  My wife and I are travelling to the UK next year to see the real thing so it was worth checking out. 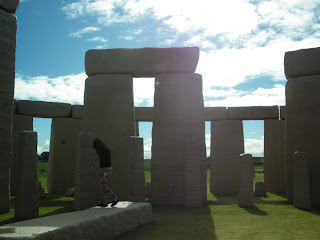 My daughter dances a jig on the Stonehenge alter.
Posted by Beccas at 6:30 PM 8 comments:

Youngy came over today for an epic 4 hour clash of Disposable Heroes in the Pacific.  Youngy commanded the Japs and was attacking a small native village on Bouganville, defended by me with a small Australian detachment.


The Battlefield.  Aussies in the middle with the support of a Matilda Frog flamethrower tank.


Japanese enter on the right with a HaGo Type 95 Tank.


Japanese entered from the left with another HaGo, and a man pack mountain gun in support.

The Australian Vickers MG crew activate and start firing into the oncoming horde.


An Australian Bren gunner comes under heavy fire, his team pin down in front of the wire.

A Japanese medium mortar crew take cover in a shell hole and start lobbing bombs into the Australian positions.


The Frog confronts a HaGo.  Flames v pop gun.  Who will win?


The HaGo catches fire and two of the crew jump for their lives as the trapped driver burns.

Suddenly Japs burst from the trees carrying satchel charges and poll mines.  It's a suicide run.

Meanwhile, the second HaGo is swamped by Australian infantry attempting to drop grenades into the crew hatches.  The Aussies fail.


Crikey, the poll mine carrying Jap charges through MG fire and reaches the frog.

BANG, the poll mine explodes and rips the Frogs turret apart.  Fuel from the flame tanks ignite and the tank explodes killing all the crew.

The battle ends.  The Japs swamp the Aussies and take the village.  Three Aussies melt into the jungle and live to fight another day.  Another good game of Disposable Heroes.  The pacific rules are interesting.  The Japs are subject to a random chart when pinned down.  The Jap player rolls a couple of dice and the results vary, from making the Japs Banzai attack, or even just kill themselves.  Youngy had 4 soldiers commit suicide.  In the end the battle was costly for both side.  36 Japanese killed.  1 Jap tank and 1 Jap Mountain Gun destroyed.  The Australians lost 33 killed and one tank destroyed.  Thanks Youngy for the good game.  I have pre-ordered Bolt Action from Warlord Games.  I will be interested to see if Bolt Action takes the place of Disposable Heroes as my number one 28mm wargame.
Posted by Beccas at 9:13 PM 10 comments: 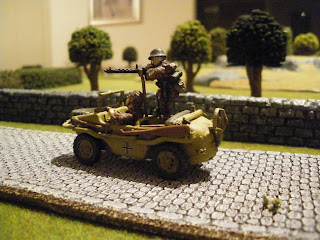 Tuesday night Godders rocked up to my place with a platoon of Late Finns and requested a game of Disposable Heroes.  Who was I to refuse?  I got out my SS, stripped each section of a MG42 to make the game a bit fairer.  And away we went. 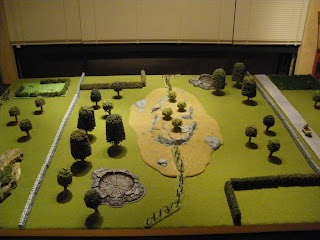 Very basic scenario.  Take that hill.  The centre hill is worth 2 points.  The two shell holes worth 1 point each.  The Finns enter the game from the right, the SS from the left. 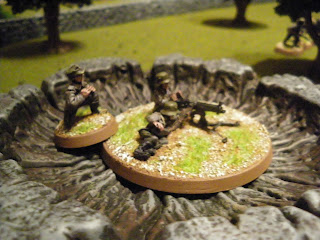 The Finns grab the first victory point and set up a HMG in one of the minor victory locations. 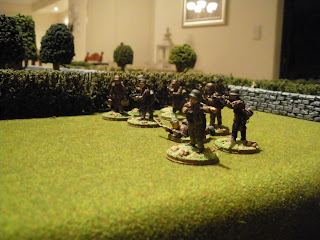 The SS sprint their full 9 inches and take the second shell hole.  Game even so far. 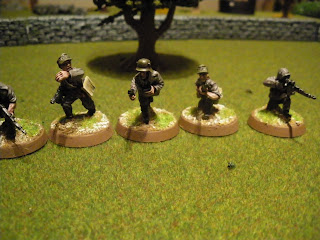 The Finns Lieutenant waves his arms, and yells "lets take that hill!" 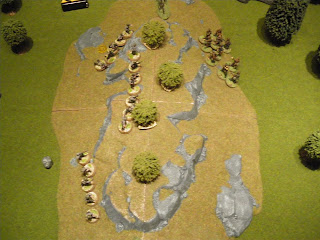 The Finns hit the crest first, but the SS are nearly there too.  It's time to fix bayonets and fight to the death.. 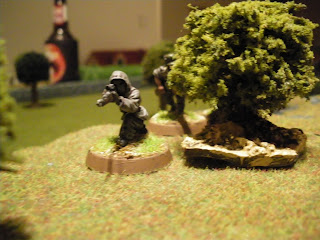 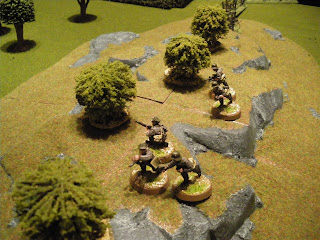 The Finns win the close combat battle and take the hill.  The SS try a few sneaky maneuvers but they are countered by the tenacious Finns.  The SS are beaten to a standstill and are force to concede the hill.  Finns victorious.  The battle was costly.  The Finns lost 18 KIA, the SS 20 KIA.  Another great game of Disposable Heroes.  Good win to Godders.  All figures are 28mm.  The SS are Bolt Action and the Finns are Battle Honors.
Posted by Beccas at 8:35 PM 11 comments: 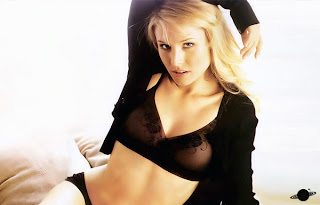 I checked the old blog today and discovered I have 200 followers!!!!!! I have been a bit slack lately, few posts, not much painting, too much Xbox. But I will try improve. Many thanks to "Sebastosfig" for being number 200. To celebrate, Kristen Bell is coming over and she is wearing something special. Thanks all...........
Posted by Beccas at 5:41 PM 10 comments: