Where Have the Italians Gone? : Disposable Heroes After Action Report 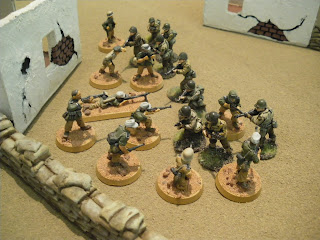 Not far from Beja Tunisia, thing have gone quite.  The small town of El Kabab is a critical outpost manned by elements of the Italian Superga Division.  But no-one has heard from them.  What has gone wrong?  Have the Americans captured the town?  Where have the Italians gone?  Maybe their omission from Point Blank was the last straw?  A small recon platoon is dispatched from 21st Panzer Division.  Their commander (me) is a cunning man and very popular with the ladies.  The platoon dismounts from their trucks and advances on the town.  Meanwhile, the American US II Corps advance.  Their commander chews his bubble gum and surveys the town ahead (this did happen and took about five minutes of my life away that I will never get back).  Something is not right.  It's too quite.  He sends in a platoon of the men he hates the most- the Disposable Heroes. 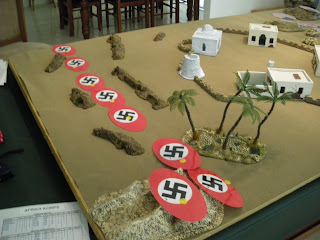 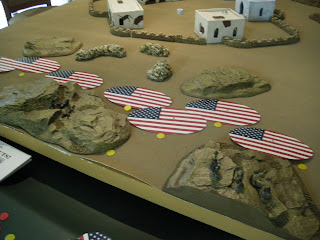 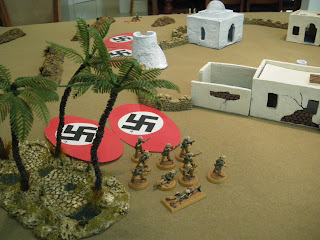 The American use their elevated positions and start spotting.  An Afrika Korps squad is revealed on the right flank. 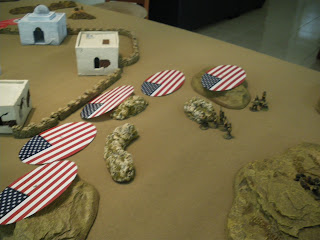 The American reach the town. 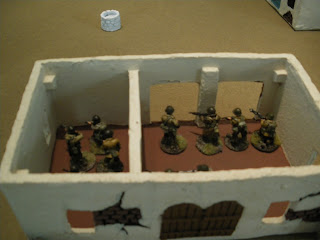 Americans take cover in the warehouse. 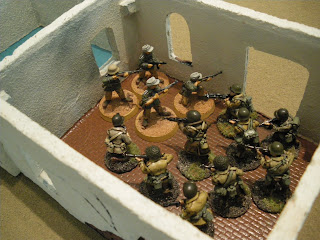 Hand to hand fighting in a house, 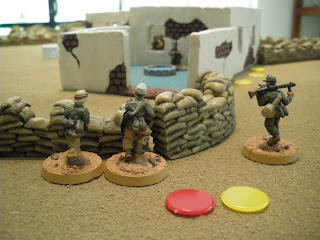 The Germans are driven back, the last three fighting men. 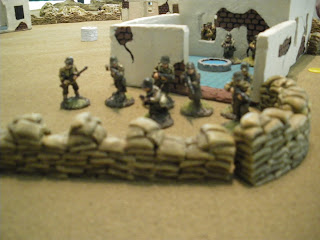 Heroes of the game.  This squad did all the hard fighting and won.﻿
We played this game as a meeting engagement.  Both platoons advancing on an unoccupied town.  We used blinds to hide our troops.  Two blinds per squad.  One blind hiding the unit, the other a dummy.  A simple rule burrowed from I Aint Been Shot Mum from the Too Fat Lardies.  A very quick summary of the game :
Youngy advanced his units on a broad even front.  I tried to be sneaky faking an attack up the centre of the board whilst most of my platoon was on the right flank.  I kept my dummy blinds advancing behind cover whilst the real units advance in the open.  The Ruse worked.  Youngy started concentrating his weapon teams in the middle of the board and spent activations attempting to spot them.  We both reached the town together and auto spotting within 12 inches revealed our forces.   Then it was a mad dash for the cover of the houses.  Youngy pinned and routed my HMG team early in the game.  The riflemen of both sides shot it out. The dice gods deserted me and favoured Youngy.  He began to pin me down.  Soon four German teams could not return fire and the Americans charged in with bayonets.  Vicious house to house fighting resulted in complete victory to the Americans.  My brave men were wiped out or surrendered.  Final result Germans : 25 Dead,  2 Surrendered, 1 Ran Away.  Americans : 4 Dead.  Germans driven from the village and complete victory to Youngy.  Great game.  Good fun.  Best rules in the world.  And where did the Italians go?  Better send emails to Iron Ivan Keith and Chal.  They might know.  Thanks for reading and goodnight.         ﻿
Posted by Beccas at 11:46 PM 11 comments: 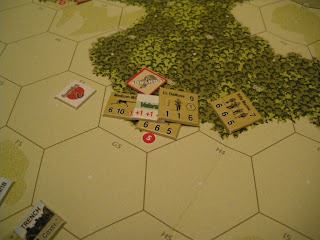 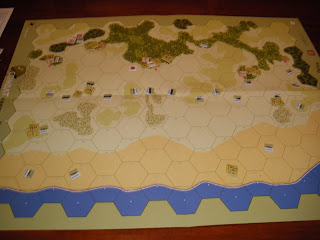 Played my first game of Combat Commander Pacific last night.  Operation Cherry Blossom - USMC landing on Bougainville Island on the 1st of November, 1943.  My opponent was Jason, an experience Combat Commander Europe player but his first go at the Pacific.

Basically, after an initial naval bombardment, the USMC arrive in two waves and have to get off the beach and take the scenario objectives or wipe out the Japanese defenders.  The Japs are in bunkers and trenches and have no surrender and will fight to the end.  The Marines will surrender if they loose 16 squads.  The game feels a lot like the original Squad Leader.  However all movement and firing are controlled by cards.  Each player has a huge deck of cards.  You each have a card hand that you replenish each turn.  The cards have orders such as fire, move, charge etc.  You might really want to assault a trench but unless you have an advance card in your hand you can't.  Random events pop up that put your plans in array.  Your card hand management is very important.

The USMC won the game (me).  The game played very well once I worked out the eb and flow of the card system.  The game took 2.5 hours.  The scenario was really well designed giving both players equal chance of winning.  All in all, a very positive experience for me.  Many thanks to Jason for teaching me how to play.
Posted by Beccas at 6:54 AM 6 comments: 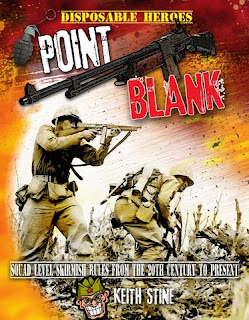 Everyone who knows me and follows my blog knows I am an Iron Ivan Fanboy.  Disposable Heroes is my favourite wargame of all time.  If Iron Ivan jazzed up the rulebook into full colour it would be HUGE.

The latest rule book from the lads is Point Blank.  A squad level skirmish game.  Average of 10 figures per side.  The rules use the same mechanics as Disposable Heroes so I am keen to try them out.  Best thing is I already have the figures.  As soon as these rules arrive I will be posting battle reports.

From their website :
Point Blank is a brand new squad level skirmish system for 1:1 modern tactical firearm combat. Players are in charge of a squad or several fire teams and control the individual actions of their soldiers, weapon teams, vehicles or support weapons. The rules are focused on the tactical concepts of fire and maneuver, command and control, and morale as well as training and experience. Any period of modern firearms combat can be simulated, from The Great War all the way to today and beyond.


The Point Blank book contains everything you need to run games with infantry, artillery, and vehicles as well as rules for spotting and hiding, as well as night, weather, smoke, and fog. There are three major periods represented for the army lists in the book: WWII (which includes Germany, U.S., Soviet, British, French, and Polish. Vietnam (which includes U.S., ARVN, Australian, NVA, and VC. As well as modern forces for the Global War on Terror or any other modern hot spot (which includes U.S., British, Mujaheddin, and Insurgent). Rounding out the book are three scenarios, each one concentrating on one of the periods covered in the book and focusing on a tactical concept. The missions include Combat Patrol, Ambush, and a VIP Snatch. There is lots more besides in this 94 page rulebook to keep players busy and gaming.
Posted by Beccas at 5:25 AM 8 comments: