Rumble in the Western Desert 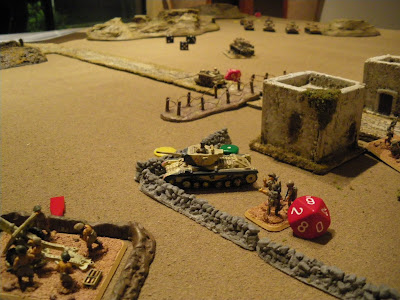 On Wednesday night the Afrika Korps commanded by Godders attended my house with victory in North Africa on their mind. A small band of Australian Infantry, a British 17pdr and one Valentine stood in their way. The allies were outnumbered 2 to 1. The game is Blitzkrieg Commander. Scenario 14 is the mission. The Allies must hold the town for 8 turns for victory. The Germans must break the defenders and force them off the battlefield. 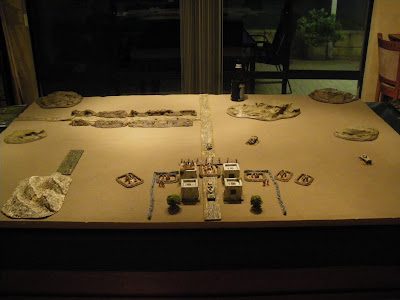 The Australians and British hold the small desert town of El Whatitsname somewhere in Western Libya. The town is very famous for it goats. The 8th Army have been on the offensive and now the Germans are counter attacking. Godders chose flank deployment to enter the battlefield. An armoured formation will deploy on the Allies left flank. A small armour formation and an infantry formation will deploy on the right flank. 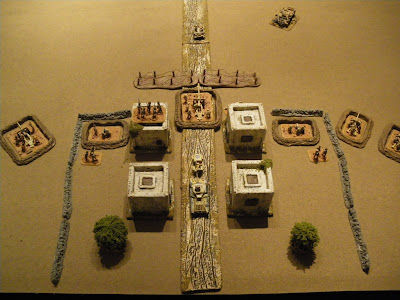 The Allies have three small formations. A 25pdr Gun and a HMG on the left flank. A Valentine Tank, a 17pdr Anti-Tank Gun, and a section on Australian veteran infantry in the centre. And two 6pdr Anti Tank Guns and a HMG on the right. An Australian Forward Observer is ready to call in support from an off-board artillery battery. The allies have spent resources on defenses in the form of gun pits, barbed wire, one visible minefield and one hidden minefield. 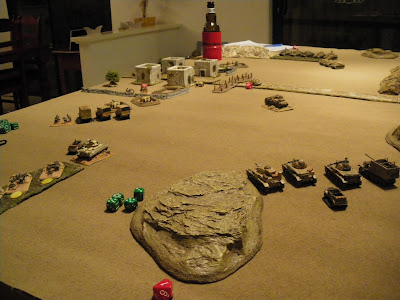 Enter the Germans. Godders passed command rolls on all three formations in turn 1 and they entered the battlefield. Three of his motorcycles carrying HMGs drove straight into the hidden minefield and were destroyed. The HMG crews were left suppressed and stranded in the minefield. The Australians thought this was very funny. One German truck was also destroyed by HMG fire. Godders placed his armour formations into good firing positions by the end of Turn 1. 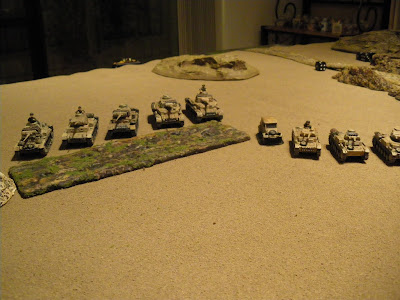 The dreaded and very strong Afrika Korps armoured formation on the Allies left flank was under the direct command of the Commanding Officer with a CV of 10. Very tough. Turn 2 was a general slugfest between the two armies. The Allies took their first loss with the 17pdr being destroyed. The Germans remained unscratched but the infantry on the right flank were suppressed by artillery fire. 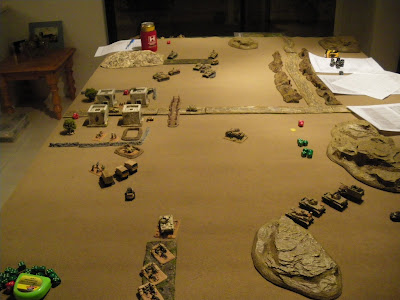 Turn 3 was the turning point of the battle lead by Godders throwing a double 6 for his infantry on the right flank. The resulting visit to the blunder table caused his infantry to advance into close combat with one of the 6pdr guns. Normally a disaster but hand to hand combat favours infantry over a gun crew and the 6pdr was knocked out. Firing between both sides continued with the Germans taking out the Vickers HMG on the left flank. Things were starting to fall apart for the allies. 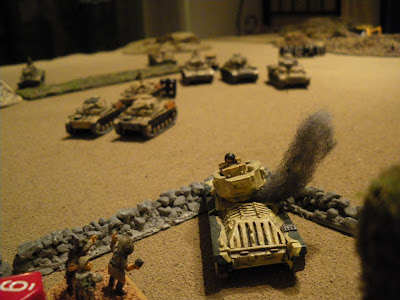 Turn 4 saw the Germans continue to use their ranged shooting. First the 25pdr Gun was destroyed. Then the Valentine. Then the Australian Infantry section. The Allies fired back with what forces they could muster but to no effect. The allies had lost 5 units and were below Break Point. I had to roll a 9 or below from two D6s for the battlegroup to stay on the table. I rolled two 5's. The allies ran. Tabled in turn 4. Victory to Godders. His honour and prestige returned, a fact confirmed when Rommel invited him over to his tent for a late night coffee!
Once again an enjoyable game. I had great fun with the hidden minefield. If playing this game again I would take more armour. Thanks to Godders for the game. Nothing better than sitting around after the game in the spiritual guidance of "Black Powder" enjoying a beer and talking wargaming. Godders supplied some fancy beer from Belgian called Hoegaarden. At $70.00 a block it as very good. Those Belgians know how to make beer. All figures and terrain are 15mm.
Posted by Beccas at 8:14 PM

Great battle report and table. Shame the Aussies didnt put up a better fight, they must have had beer on their minds as well!!

I consumed XXXX during the game so I should have had extra brain powers.

I'm not sure more armoured would have helped. I might have put a screen of dug in infantry in front and put my AT dug in behind. Keep the AT not firing for as long as possible to prevent them from being spotted and force the Germans to close in on the dug in infantry. They are very hard to dislodge frontally when they dug in and if your AT can wait for that moment to open up, you might be able to take them out.

I agree with Anonymous with his thoughts.

Cool Beccas. I must have a game of this sometime soon.

Great looking report. I'm still trying to convince my group to play BKCII. It looked like the Germans had overwhelming numbers on the Aussies, but perhaps the reply of the battle would solidify that.

Hoeggarden is excellent, I've been having a low key love affair with it for some time. As for BKC, we had a long chat about it the other night after another FOW fiasco. I refuse to play that game ever again, it brings out the worst in everyone. We've played BKC in the past, but with strange results. Next WW2 game scheduled is using IABSM.

Thanks for all your comments. Very much appreciated by Godders and myself.
@Anonymous. Just gone over that in the rulebook, great suggestion.
@Scullmeister. Anytime.
@Tom. FOW is a tournament game and it creates that unfriendly win at all costs situation. IF you try BKC, you need to get BKC2. It's good and suppression is your friend. IABSM is a great infantry game. But trying to undertand tanks and artillery rules you need to first study nuclear physics at uni.