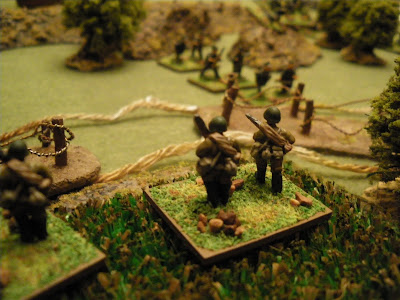 Wednesday night is gaming night and once again Godders and myself faced off with Blitzkrieg Commander. This time we used a real historical battle scenario titled "A Difficult Affair II" written by Steve Curtis. A Difficult Affair II is part of a series of scenarios centred around the Battle of Kursk in 1943. This scenario is played out in a small area of 16" x 24". All infantry.

The situation : At 1500hrs, on the 4th of July 1943 various German units of the 4th Panzer Army are sent forward into Soviet positions on reconnaissance in force missions. The objectives of these missions were to discover traps and gain lodgement in the Soviet lines.

Godders in Command of the 15th Company, 3rd Battalion, Panzer Fusilier Regiment, Grossdeutschland is tasked to capture the western edge of a low treeless ridge west of the village of Butovo. High command believes the ridge consists of dummy positions. 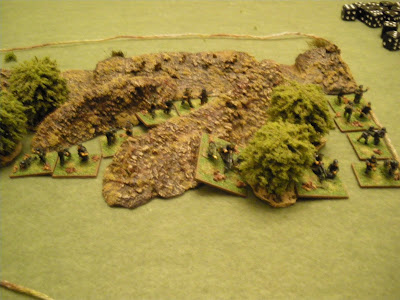 Godders sets up in his starting positions. He is in command of 9 Infantry Sections, 2 HMG Sections, a FAO and off board 81mm Mortars. 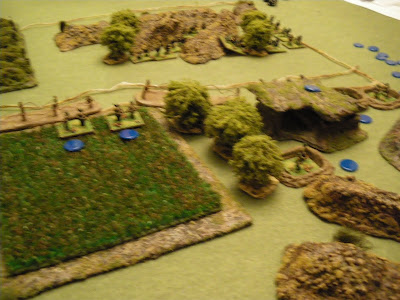 I am in command of a Soviet Reinforced Platoon, 3rd Battalion, 199th Guards Rifle Regiment. My mission is simple, hold the postion at all costs. Not one step back. I have 4 Infantry Sections, 1 MMG, 1 on-board 50mm mortar, a FAO and off-board 82mm Mortars. I have one wooden bunker and my troops can start the game dug in. I have access to barbed wire. The string line in the centre of the photo represents the crest of the ridge. I placed my MMG in the bunker. I put two infantry Sections in the crops on the left flank. And two infantry Sections dug in on the crest of the slope on the right flank. All troops are concealed. 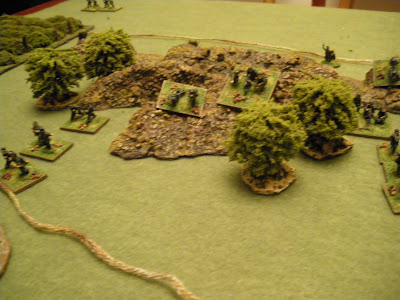 The Germans started and immediately advanced into no-man's land. As the Soviets are concealed the Germans cannot shoot until they reveal the Soviet positions, or the Soviets reveal themselves by opening fire. Which they did to good effect. Most Germans were under half range and were in the open. German sections began dropping like flies or were suppressed. This went on for three turns then Godders diced up a blunder. Which was actually lucky because his visit to the blunder table forced all his units to retreat one full move, safely away from the open ground. 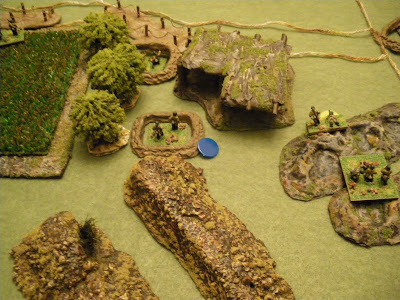 Now in cover, and all Soviet positions revealed, the Germans began the process of concentrating fire and slowly withering down the defenders. Although the Germans took casualties from return fire. But it was the Soviets turn to blunder. My visit to the blunder table was devastating. All my troops advanced one half move towards the enemy. This included my MMG in the bunker and my dug in sections. Now they were all exposed in the open in no-mans land. (The blunder chart represents a loss of command and control of your troops and my lads obviously got all excited at their success to date and went forward after the Germans).
Needless to say, I lost 3 sections and the MMG. I was now down to 1 section, 1 mortar, and my off board mortars.
The Germans advanced up the hill without much effort. The mortar and remaining section were knocked out in close combat. And the game was over. Victory to Godders. And a game well played. 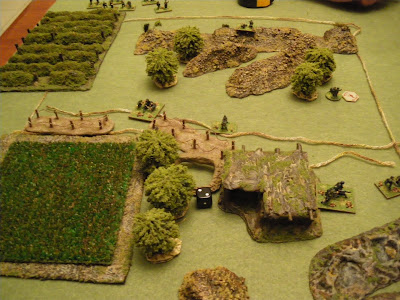 The Butchers Bill. The Soviets were wiped out. Not one step back. The Germans lost 7 Sections and achieved their objective.
Real Historical Outcome. The German 15th Company took the ridge after two hours of fighting at a very high cost in soldiers. It was pre-planned that the 15th Company would then support an attack on the village of Butovo but due to their heavy losses the company was withdrawn from the line. A sign of things to come in the Battle of Kursk.
So as you can see the game played out on the tabletop matched the historical result perfectly. The game would have dragged on if I had not blundered but the result would have been the same. Godders would have stayed in cover and slowly whittled away the defences with HMG, rifle and mortar file. Both of us agreed it was a great scenario to play and using infantry exclusively was challenging and fun. In this scenario one unit of infantry (stand) represent one section. We had to house rule off-board mortars as these are not covered in the rules. And once again Godders supplied me with Belgian beer. Very nice all round.
Posted by Beccas at 8:52 AM

Once again a good report Paul. Poor Reds, never mind as long as the beer was cold!

Nice report mate, especially the historical information. Let me know when your doing another one. I might even bring some nice GERMAN beer!!

Thanks Paul for the photos and report.

Nice one, Paul; sometimes small-unit actions are the best fun :) Anyway, have good Christmas and I will probably 'see' you in the New Year on Battlefield Academy, as I have finally got a copy...however, like a plank I left my laptop in my flat in London and so can't get to it 'til January...lol!
All the best,
Monty

Excellent Monty. Post back here when your up and running and I will issue you a challenge.