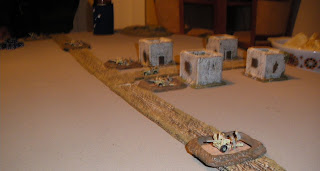 Welcome to another Blitzkrieg Commander Battle Report.  This time we return to the desert in 1943 and pit the Deutschland Afrika Korps against the Australian Imperial Force.  Godders commands the Germans, I command the AIF.   At stake is the small town of El Godfrey, a place where weary goat herders can rest after a long day of goat herding.  (Does anyone know where I can buy some 15mm goats?)  Rommel needs this town as a staging point for his thrust to Cairo.  The Australian plan is simple and it worked at Tobruk.  Let Rommels tanks pass the outer defensive perimeter and draw them onto hidden guns.  Ambush the following infantry.  And cut off the panzers retreat. 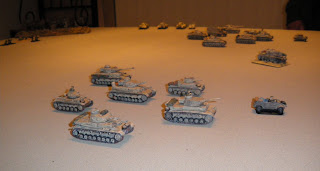 The Panzers advance towards El Godfrey in two powerful formations. 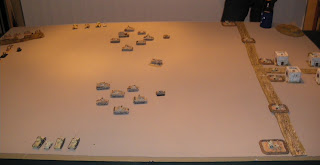 "It's a trap!"  The Australian anti-tank guns sited in the town open fire on the Germans.  British armoured support hits the Panzers in the flanks.  The German commander is not worried.  His following infantry will deal with the guns while he turns to deal with the flank tank attack.  "Where are the infantry?" 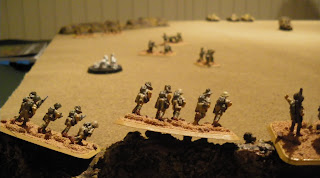 "It's another trap!"  The Australians rise out of their caves and ambush the panzer grenadiers on the left & right flanks.  This was a blood bath.  All the bonus flank shots decimated the Germans.  After the first round of shooting only a few Germans remained. (Apologies for unpainted figures - that's a carton).

The Panzers take a terrible beating from the Anti-Tank guns. 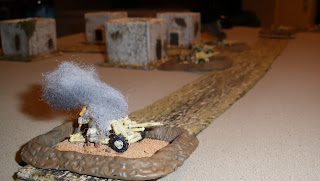 But the Australians don't get it all their own way. 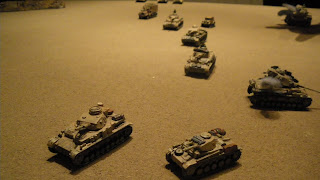 The Germans turn to secure their flanks. 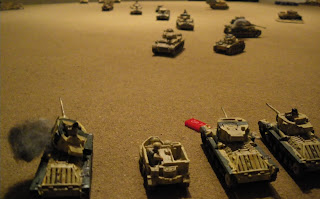 The British are out gunned and out armoured.  Very soon the British tanks are all burning wrecks.  However enough damage has been done to the German Battlegroup and they reach breaking point.  A roll of the dice seals their fate and they are forced to retreat. 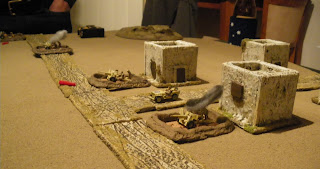 El Godfrey has been held.
This game was set up in scenario format ignoring army points.  It was going to be a hard ask for the Germans to win.  The idea was to have a fun game.  All it takes are a few failed CV rolls on the Australians part and the Germans would have a good chance of winning.  We tried to simulate the circumstances of the first battle of Tobruk, using a later time period to suit our models.  It seemed to work.  A good interesting game that lasted 2 hours.  We have seen what German do to cows, thankfully the goats where saved.
Posted by Beccas at 9:06 AM

Very good post Paul. Good to hear that our four legged friends are save and well.

Prieser and faller do goats in OO scale.

Hooray for the goats! Lovely report Paul and thanks for sharing the photos.

Looks like fun game and I love those little desert buildings

Nice to get in a game or two eh? Great looking table and kit mate

Hey, you stated in a much more direct way what I was trying to communicate, thanks, I will recommend your site to my friends.

This looks real fun, making the miniatures and stuff.

blitzkrieg commander + desert war = pure pleasure. Also I like the little houses quite a bit.

The houses are from Miniature World Maker. They are made from rubber.

Hi, I came across your site and wasn’t able to get an email address to contact you about some broken links on your site. Please email me back and I would be happy to point them out to you.