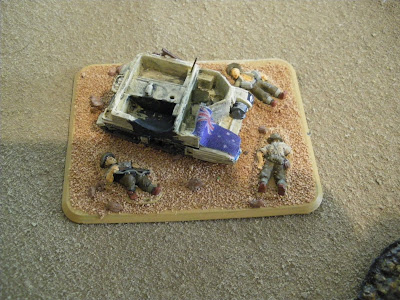 Monday morning Godders came over for a game of Blitzkrieg Commander before we went on duty. 1500pts per side. Godders played the Afrika Korps and I was the 8th Army. We each placed an objective on the 6x4 table. The goal was to reach the objective or break the enemy force. I had to reach the wounded Australians pictured above. 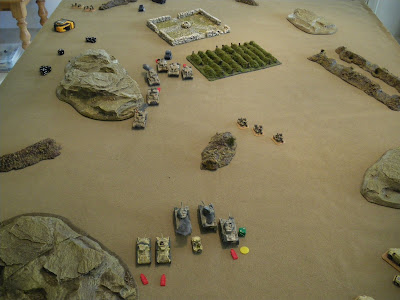 Godders went first and split into two formations. The first being a large tank unit consisting of various Mk III's and IV's, supported by three units of HMG infantry on motorbikes. I had three Shermans and two 6pdr Valentines waiting for him. Godders was throwing command rolls with glee racing up to my tank formation. When he came into range I used opportunity fire and halted his advance. Godders second formation consisted of infantry, two Panzer II's and a Diana. They started to sneak down the right side of the table. Godfrey's Diana is not painted and I argued unsuccessfully that it should cause a -1 to his command roll! 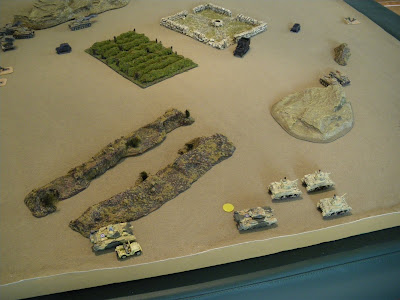 My command was split into three formations. The heavy tank formation now engaged in a dual with Godders tank formation. A fast tank formation consisting of three Honeys and two Crusaders, and a three 6pdr Anti-Tank formation lead by the CO. I also had a forward artillery observer floating around. I decided to send the fast tanks up around Godders flank with the intention of coming in behind his army. Good plan ruined by the Diana firing at long range. Slowly I had to break suppression and destroy that Diana. My anti-tank guns sat on the objective. 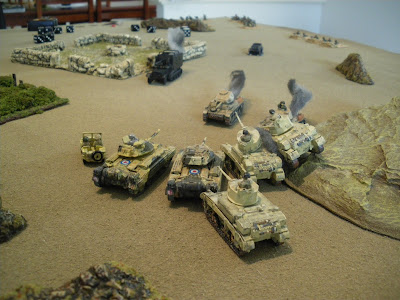 Slowly the fast tanks closed in on the Diana and destroyed it, along with two Panzer II's. My tanks were now headed for the objective guarded by three units of infantry. 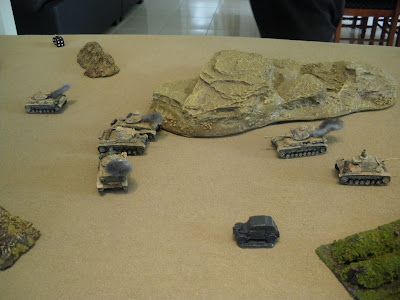 Godders heavy tanks wiped out my heavy tanks but at a terrible cost. Only two of his tanks survived the engagement. In context of the game, a mortal blow to the German army. His two surviving tanks did a u-turn and raced back to protect the objective. His three HMG units were taken out by artillery fire and his army Break Point reached. Godders began each turn dicing to stay on the table. He failed and the Afrika Korps fled the battlefield with a bloody nose. Much to Rommel's displeasure.
The 8th Army (me) were victorious and basked in the glory of victory.
Thanks Godders for a good game, and thanks to Blitzkrieg Commander for being a really good gaming system. This is my fifth game and I only needed to look up the rulebook once. That's pretty good.

Good little report, but those Aussies in the carrier look more than wounded!

I liked it too, nice models also

Great report Paul and thank you for sharing.

Just had another look at your table Paul, and I especially like the various terrain pieces you have on it - particuarly the ridges - which have inspired me for my 20mm AA conversion table

Monty, the whole lot is bought. The hills are Battlefront/Gale Force 9 hills. Everything else is from Miniature World Maker. I highly recommend MWM, really good stuff.

Good write-up and nice pictures. Would it be possible to share your BKC army lists for these 1500 pts armies? I'm just getting started with BKC and that would be a great help. Thanks.

Hi James. I can't honestly remember what we used. We make our lists just before we start the game. All from the BKC book lists. If you need help making a list let me know below and I will try explain it as best I can.
Cheers
Paul

Thanks for the offer Paul. I've used other ruleset army lists so I'll figure this one out. I was just looking for the easy option of nicking one someone had already worked out! Unlike DBM and FoG, I'm surprised I can't find examples of BKC armies on-line anywhere. Cheers.

It's easy to do. Just make sure you balance out your points. I try and have 1 HQ in command of each formation I field. So 1 HQ in charge of the armour, 1 HQ in charge of the infantry, and I always take a FAO. There's no right or wrong list. And you can always follow historical lists and disregard points like we did for A Difficult Affair II which is posted on the blog.